Born in France in 1915, grew up in the U.S., and died in Thailand in 1968, Thomas Merton, is regarded as one of the most celebrated Catholic writers of the twentieth century. He is particularly well-known for his autobiographical work, The Seven Storey Mountain, an account of his life from 1915 to 1944. Merton completed this book in 1946 at the age of thirty-one, and published it in 1948. In this piece the author chronicles his spiritual journey from the world to the monastery. An important theme that runs through the book is his quest for happiness.

Merton describes himself, in his early years, as “an extremely unpleasant sort of a person—vain, self-centered, dissolute, weak, irresolute, undisciplined, sensual, obscene and proud” (132). In the course of time, however, he turned to communism, “a step to moral conversion” (131). Yet he acknowledges: “It was not the right conversion, but it was a conversion. Perhaps it was a lesser evil” (131).  As a communist, he started blaming his society for his unhappiness: “it was not much I myself that was to blame for my unhappiness, but the society in which I lived” (133). But later the young communist was disappointed to find out that communists, having excluded Him [God], and all moral order with Him… were trying to establish some kind of a moral system by abolishing all morality in its very source” (146). As a result of his disappointment, he left communism.

Meanwhile, Merton began to read books by Roman Catholic writers. These books became instrumental for his conversion to Catholicism. He relates the following remarkable experience after attending his first mass: “I could not understand what it was that had happened to make me so happy, why I was so much at peace, so continent with life” (210-11).

Many months later, at the age of twenty-six, he entered the Abbey of Our Lady of Gethsemani, a Trappist monastery in Kentucky. It was here that he wrote his autobiography and found happiness, as indicated in his words: “if all you needed to be happy was to grab everything and see everything and investigate every experience and then talk about it, I should have been a very happy person, a spiritual millionaire, from the cradle even until now. If happiness were merely a matter of natural gifts, I would never have entered a Trappist monastery when I came to the age of a man” (4). Merton considers the monastery “a school in which we learn from God how to be happy.” He continues, “Our happiness consists in sharing the happiness of God, the perfection of His unlimited freedom, the perfection of His love’ (372).

From a literary point of view, The Seven Storey Mountain is probably one of the best classic autobiographies in English. It is readable, lively, engaging, and exciting. Most importantly, its poetic style is impressive, a quality which should not surprise his audience since Merton was a poet. As far as the literary worth of the book is concerned then, even non-Catholic readers can profit from it. They, especially the writers, can learn from Merton’s outstanding style of writing. Moreover, the book can be an inspiration for moral living. Merton can challenge his crowd, particularly the young people, to give up their materialistic passions for spiritual pursuits.

However, despite these literary and moral benefits of the book, we should realize that the Catholic theology of Merton behind his piece is problematic. This theology, for example, teaches us to pray to God through Mary (130) and to use Rosary in our prayers (369). Such practices go against the Scriptures (John 14:6; 1 Tim. 2:5). Most seriously, this theology is not grounded solidly in the gospel of Christ. Consequently, the kind of change that it produces is only outward and not inward, for the gospel alone can bring a true conversion (Rom. 1:16). Any other transformation is superficial; and therefore, incapable of generating genuine happiness.

To read this book review in a PDF format, click here. 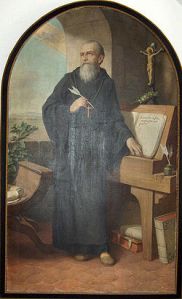 Without a shadow of doubt, Saint Benedict’s (c. 480-547) Rule influenced considerably the medieval catholic spirituality of the Western world. In particular, it provided the backbone for the subsequent Benedictine spirituality. And even today, although it was written about fifteen centuries ago, The Rule remains an important pattern for living among Benedictine monks and nuns. Its popularity, however, goes beyond the fence of the Benedictine community. Outsiders of this community have also come to appreciate Benedict’s Rule, perhaps because of its timeless moral dictums. As Timothy Fry, editor of The Rule of Saint Benedict in English, remarks: “He wrote his Rule primarily for monks, but its sound principles for working together and living together have proved relevant to people of all classes of society through fifteen hundred years” (xxvii). Although Fry is biased in his remark because he himself is Benedictine, there is an element of truth in his statement that is worth considering.