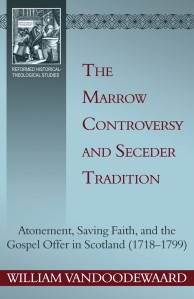 Thank you so much for your willingness to be interviewed. As a lover of historical theology, I enjoyed reading your well researched book—the best on the subject.

Here are some of my questions for you about your work:

The “Marrow controversy” refers to a theological and ecclesiastical controversy in Scottish Presbyterianism between the years 1718-1726, centering on the republication of The Marrow of Modern Divinity by a gospel-hearted minister, James Hog of Carnock, in response to what he and others saw as a growing tendency towards legalism. A decade later, over a different issue in the life of the church, patronage (which allowed local nobles a key hand in the calling of ministers) several of the ministers who had been involved in the Marrow controversy (including Ebenezer Erskine) became instrumental in forming the Associate Presbytery (the beginning of the Scottish Secession churches). In my work I sought to evaluate whether the theology of the Marrow supporters in the window of the controversy was similar to the theology characterizing the Secession churches during the following century.

Issues of legalism and antinomianism were key to the English and Scottish contexts of the Marrow of Modern Divinity, through in the Scottish context it appears the key challenge was error on the side of legalism – particularly a legal preparationism. As Sinclair Ferguson notes in his lectures, legalism and antinomianism are perennial issues of the sinful human heart. We try to establish our own righteousness before God apart from Christ, and we pursue sin and treat his costly grace as through it were a cheap thing, or act as through his holiness, expressed to us by his law, has no claims on us. These two errors often go hand in hand. It is the faithful preaching of the gospel which unmasks the ugly reality of both and graciously provides the divine answer in Christ.